By using this site you agree to the use of cookies for analytics and personalised content.
Go to the content
Shortcut to footer
Search
Your favorites
To startpage

At the Bird Lake Angarnsjöängen is an evocative rock carving that gives a little insight into Bronze Age people's religious world.Örsta inscription at Angarnsjöängen is one of the Stockholm's largest petroglyphs. The carved probably sometime during the Bronze Age. It is beautifully situated in a welcoming recreation area.

The inscription, which is made on a gently sloping granite slab, imagine two ships and two stallions. The largest ship is just over 2 ½ meters long. The horses pulling a wagon with four wheels, or suns. The image may represent a cultic procession and 3,000 years ago, this may have been the site of religious ceremonies.

The horses depicted mule to mule may have been a way for the carver to "unfold" the image's perspective so that all the characters are visible.

Prehistoric rock carvings are originals and one of the oldest memories we have of ancientreligious beliefs. They had great significance for the people of the Bronze Age and was an important part of their magical and religious world.

Scientists believe that the carvings primarily turned to higher powers, but they are also directed to other people. A magnificent rock art was intended to impress others and give status to those who commissioned it. Meanwhile, left eternal traces in the landscape testified that the area was a time occupied by people.

The word rock carving is a bit misleading because most are inknackade. It has never found any certain color tracks on petroglyphs. They still believe that they have been imålade. The color you see today on the carving is painted for the figures to be more visible.

Örsta inscription is one of the few rock carvings in this part of the county. It is also very large, well-made and beautifully situated in a nature reserve.

Angarnsjöängenis one of the county's foremost bird lakes. At the reserve's main entrance at Örsta are shelters, barbecue area and a visitor center with an exhibition on birds and nature in the area.

The trail Sjöängsslingan, part of boardwalk, is 6.7 kilometers long and runs around the entire lake.

Availability
A narrow forest path leading to the inscription which can be difficult to get around in a wheelchair and pram.

Find us
SL Örsta bus stop. Follow Arngarnsvägen back a bit.
By car: From Angarnsvägen is a sign with the text "nature reserve", and at the crossroads of the church and also at the entrance to the parking lot. Large parking lot is about 400 meters from the carving. 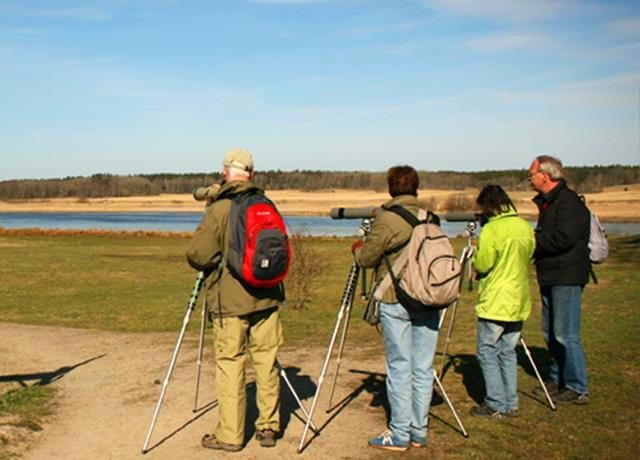 |Translated by Google translation| Angarnsjöängen is a nature reserve, known for its rich bird life. The reserve is...